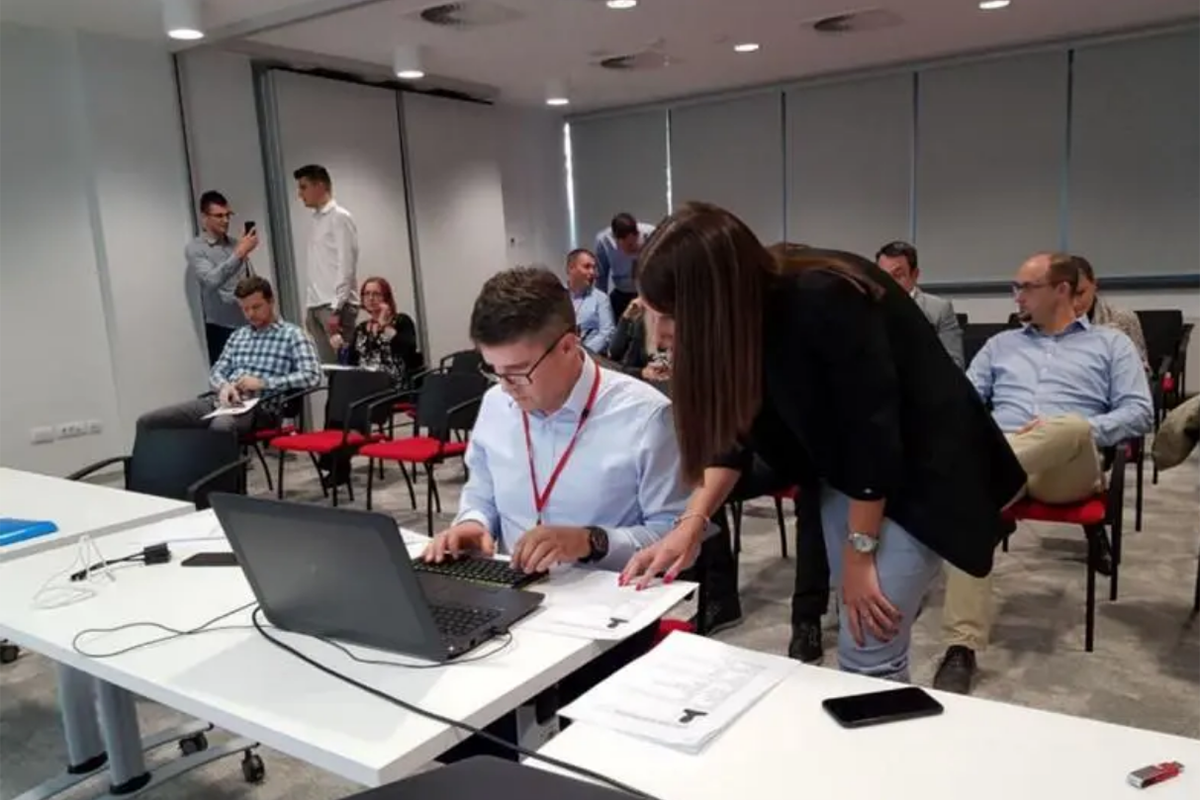 After 6 months of development and over 3 months of preparation, the Proof of Concept (POC) testing phase of Blinking software was initiated with two Serbian banks, with the idea of getting more local banks to join in this initial phase. The successful launch of the Blinking PoC was done on 27.09.2018.

With enough information about the Blinking platform, its modules, and why we developed the product in relation to GDPR and PSD2 regulations in previous blog posts, we will focus entirely on the Blinking Proof of Concept (POC) which was launched recently.

Banks and Blinking employees at the official launch of the PoC test phase.

The blinking team focused on developing the systems’ architecture for 6 months after which we moved on to developing Blinking AUTH, KYC, and GDPR modules. The idea for this direction in developing modules didn’t come as a stroke of luck of course, but from deliberate regulatory compliance that respects individual private information, numerous workshops, and platform demonstrations to business entities from different industries.

Initial demonstrations showed the biggest interest in digital identity management platform from the financial sector, namely banks and insurance companies, and telecom service providers. Among these industries, banks were most prepared to act and showed the desire to see the system in action. Clearly, banks were not just interested in the demonstrated application of blockchain technology outside of cryptocurrency hype but the fact that the platform was built in due time by a small team and that it provides a potential solution to the problem of digital identity. It also comes as no surprise since banks were most interested in the exchange of data gathered in the Know Your Customer (KYC) process that can be entirely done remotely as well as a complete technical solution to their GDPR/PSD2/FATCA/PEP/AML worries.

Banks and Blinking employees testing the exchange of data gathered in the KYC.

The first phase led to the initial negotiations and organization of joint workshops with a focus on banking innovations. With different bank departments actively contributing to the discussion, and upon displaying the functionalities and private blockchain network deployment, a conclusion was made that most of them see the Multi-factor authentication (MFA) — AUTH module as the foundation for two others that raised a lot more interest — KYC (Know Your Customer) and GDPR modules. That was the time Blinking modules were established and those three primary functionalities were defined:

The second phase of PoC went in the direction of demonstrating all the possible applications of Blinking software in the banking industry as well as adjusting the Blinking product to the financial sector needs. The Blinking team built a test system using IBM cloud technology. A lot of effort was invested in developing client applications for all major mobile and desktop platforms. Demonstrations of AUTH and KYC Blinking modules in real-time environments led to many comments, meetings, and workshops on the subjects of regulatory compliance, technical compliance, and data exchange in secure and closed environments. Especially taking into account the Serbian Bank Services Law provision to honor the territoriality of data for their users.

Service requesting authorization to access private user data for the purpose of the KYC process. Digital identity was created previously in Societe Generale and AIK bank requests access to data.

The focus of the third phase was the definition of PoC together with employees from different bank departments of Societe Generale Serbia and AIK Bank. This was also the phase in which the technical environment for the PoC network and architecture was defined. The network was fully distributed, each bank and Blinking company had their own hardware infrastructure on-site that was connected into a network. An isolated network was created and Fabric peers were deployed and orchestrated using Kubernetes multiple cluster technology. Each organization had independence in managing its cluster while orchestration and policy were employed from one point. Technical compliance was a major issue and the development approach was data-driven. This led to the creation of the system that has fulfilled GDPR compliance.

Blinking Co-founder and COO Miloš Milovanović holding a presentation about blockchain technology and the start of the Blinking PoC phase.

After several months of meetings, workshops, and negotiations, the fourth phase — the official PoC launch was initiated on 27.9.2018. Employees from Societe Generale Serbia and AIK Bank successfully tested the Blinking platform by creating numerous digital identities while at the same time conducting several KYC data exchanges. In total 20 people tested the system at the same time in real-time which led to a conclusion that the PoC test phase was successfully started and is live at the moment of publication of this blog post.

We do have to emphasize that due to regulations and legal compliance, banks and Blinking agreed on creating false, imaginary identities in the PoC phase. If the testing in the PoC phase proves that the platform is stable in real-time, there is a strong desire by the Blinking team as well as from the representatives of the aforementioned banks to test the system with real users.

Both banks have clearly stated that they are very interested in the implementation of the Blinking platform and its digital identity management platform and will work jointly with the Blinking team on reaching a model that is ready for the production phase.

This presumes, of course:

There is a lot more to be done surely, but these are all the tasks team was preparing for and is ready to tackle head-on by the end of the year.

To that extent, we had the privilege of being a special guest at the Association of Serbian Banks “Bankinfo” conference held at the lovely Palic lake in northern Serbia, with all the banks having the opportunity to see the PoC testing phase in action and in real-time. Since this was the first public announcement of a successful PoC and the fact that a private blockchain network has proven a clear use-case, this time there was even more interest from other banks.